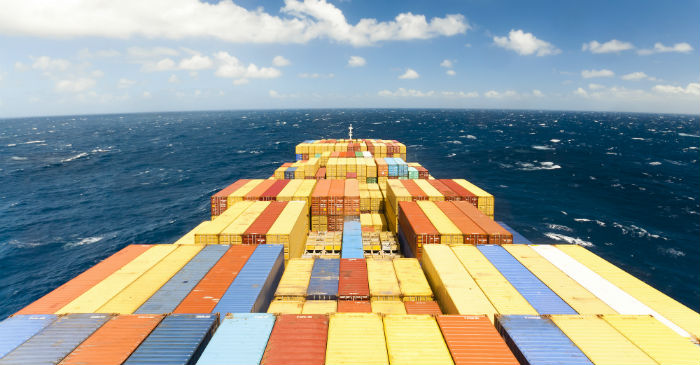 A shipping container is a sturdy container that can withstand the stresses of transit, storage, and handling. Shipping containers exist in a variety of shapes and sizes, ranging from massive reusable steel boxes used for intermodal cargoes to the ubiquitous corrugated boxes. In international shipping trade. Shipping container is practically synonymous with “intermodal freight container,” a container designed to be carried from one method of transport to another without being unloaded and reloaded.

There are over seventeen million intermodal containers in use around the world, and shipping containers convey a significant amount of long-distance freight generated by international trade. Furthermore, it is anticipated that many millions of these containers have been dumped as a result of the high transportation costs of returning them to their original port. Their creation contributed significantly to the globalization of commerce in the second half of the twentieth century, lowering the cost of transporting goods and hence long-distance trade drastically.

Businesses required some time to develop an organized strategy for utilizing and reaping the maximum benefits from the role and use of shipping containers. With the development of modern telecommunications in the late twentieth century, it became increasingly beneficial to have standardized shipping containers, which made shipping procedures more standardized, modular, and easier to control and coordinate.

High cube containers (which are 1 foot (305 mm) taller than regular shipping containers), pallet wides, open tops, side loaders, double door or tunnel-tainers, and temperature-controlled containers are all examples of specialized shipping containers. A portable fuel and oil freight container known as Transtainer is another specialty container. The hybrid bulk fuel tank was designed with the construction, mining, logging, and farming industries in mind. By road, rail, and sea, the tank can transport and store bulk fuels as well as dangerous liquids.

Reasons Why Containers and container ships are scarce.

This means that the expected was not met with an adequate supply of available shipping space.

The scarcity was severe because of the following:

World trade is done on the basis of cargo containers. Raw materials and finished items are transferred from one international trade centre to the next. The container industry’s problems have traditionally coincided with the economic cycle.

A conventional 40′ container produced in China now costs around $6,000, which is more than double what it cost in 2016. As a result of the post-lockdown rise in demand and lower container turnover, prices surged. Thousands of containers have still to be found.

According to Bloomberg’s Port Congestion Tracker, a typhoon in Asia spawned another wild week for shipping in a year marked by a dozen major storms, rolling Covid lockdowns disrupting key manufacturing hubs in China and Vietnam, a trucker and factory worker shortage, and a re-emergence of consumer preferences.

According to the data, there were at least 107 container ships waiting off the coasts of Hong Kong and Shenzhen. The backlog was exacerbated when the storm passed through Hong Kong around midweek, shutting down the stock exchange and idling the city’s ports. RBC Capital Markets estimates that 77 percent of ports around the world are experiencing unusually long turnaround times.

The stuffing is exacerbated by warehouse capacity.

Depot potential is a critical factor in the industry that is often neglected. Many containers are removed at distribution centers, and if there isn’t enough space, the container circulation problem worsens. Growing e-commerce demand, particularly post-COVID, has resulted in a shortage of warehouse space, resulting in higher warehouse rental rates, which are now filtering through to consumer prices.

This same Warehouse Rates Indicator element monitors storage billing., set a new high in the index’s history. The reading is up 2.6 percent from the previous month and up 20.5 percent from a year ago. The performance of dedicated warehouse REITs is another indicator of strong warehouse demand sector fundamentals. Since the start of 2020, the Bloomberg Industrial/Warehouse Index has increased by 45 percent.

Resolving the supply chain bottleneck is critical for a variety of reasons.

Container shipping companies canceled scheduled sailings (known as “blank sailings”) and consolidated shipping routes in the first half of 2020 due to a drop in US merchandise trade and a slowdown in Chinese manufacturing. As a result, shipping lines were able to cut expenses and mitigate the effects of overcapacity on freight prices.  For example, the three main container shipping alliances (THE Alliance, 2M Alliance, and Ocean Alliance) declared in June 2020 their intention to cancel 126 scheduled sailings between Asia and North America and another 94 sailings between Asia and Europe until August 2020.  In the first half of 2020, container transport companies canceled almost 1,000 journeys.

Because enterprises expected weaker international trade and slower economic recovery following the COVID-19 pandemic, these price decreases stabilized spot rates for maritime freight in mid-2020, somewhat above their 2019 levels.  Maritime freight prices increased significantly in the second half of 2020, as commerce rebounded and shipping capacity was outstripped.

Impacts of COVID-19 on Transportation Personnel.

Port operations were hampered by high COVID-19 infection rates among port workers, which reduced the amount of cargo that could be moved to and from ships.  As a result, ports became bottlenecks, with shipping container backlogs delaying cargo loading and offloading. Port production may have been harmed as a result of updated health policies and working conditions. Additionally, labor shortages had an impact on global supply networks. Onshore transportation systems (such as rail and trucks), for example, encountered labor shortages, which caused delays in the delivery of goods and increased expenses.

The COVID-19 epidemic slowed the flow of products even more by prohibiting international travel for marine workers and raising the expense of maritime staff. Many governments enforced travel restrictions and specific quarantine measures as the COVID-19 epidemic grew into a global pandemic, limiting labor mobility in the maritime sector.

According to the International Labour Organization, 800,000 sailors will be unable to board or disembark from their ships by 2020.  This difficulty began to fade in May 2020, when some governments permitted companies to charter planes in pre-approved “safe transit corridors,” allowing seafarers to travel from their home countries to specific ports, relieving other seafarers.  These and other factors drove up labor costs, including hardship pay to compensate personnel trapped on ships, as well as greater repositioning travel costs.

According to digital supply chain experts, average shipment delays from China to Europe climbed to 6 days in December following months of decline. Delays on routes from China to the US west coast have been progressively growing since October. For months, schedules have been delayed due to congested ports and production delays. “As Covid breakouts persist throughout supply chains and customers continue to buy at a healthy rate,” project44 predicted, “delays are expected to continue well into 2022.”

Covid continues to have a significant influence on global trade, since shipping rates have risen, delays have become commonplace, and empty cargo containers are being stored in the wrong locations around the world.

The Us financial plan is likely to remain reliant on Pacific trade, the ports of Los Angeles and Long Beach will require additional investment to expand capacity. Even though the Biden president’s members of both parties’ expansion project include $17 billion for ports, Cordero believes that public spending alone will not suffice. Rather, he it seems to be self – assured that asset managers would be intrigued to invest in US shipping companies because of the numerous rewards.

Carriers have seen significant rates of return during the epidemic, with operational earnings in the double digits. In the year 2020, there will be a few cargo ships. Shippers have a number of options.

Owners are looking at whether the situation is abusive behaviours. While there are a number of reasons behind this, such as

Exporters and logistics firms in the United States aren’t the only ones pleading with the government to take action against global container lines for allegedly poor service and unfair pricing during the crisis.

The uproar from global forwarder and shipper organizations about anticompetitive behavior became so loud that five competition authorities, including the US Department of Justice, convened a working group on Friday to share intelligence and coordinate investigations into suspected anticompetitive practices.

For all shipping container needs.

Ameritrans is fast, reliable and efficient.

The importance of proper packaging in an ocean freight shipment