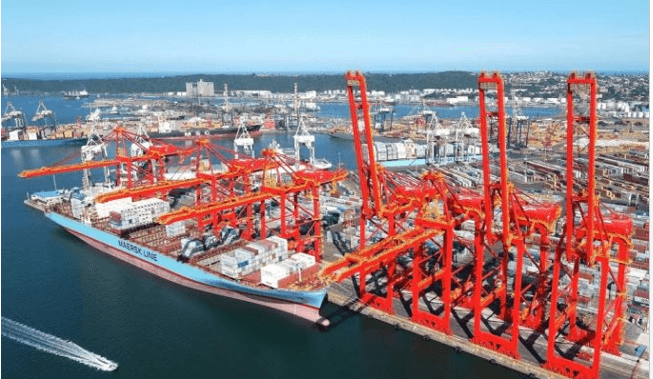 Africa’s ports are a viable source of revenue for the nation. They are also tourist attractions. Due to their highly successful port management agreements, African ports have grown popular. A large portion of the country’s imports and exports pass through these ports. The country is quite proud of its top 10 ports in Africa, which are:

It is Africa’s busiest harbor. Durban has at least 59 slots, making it one of the largest cargo ports in Southern Africa. The port is still expanding and developing new sections nowadays. The port is connected to key industrial districts

The port of South Africa is located in the city’s central business sector. The Port of Durban is Sub-Saharan Africa’s largest shipping terminal and the Southern Hemisphere’s fourth-largest container terminal.

The port of Durban is Africa’s busiest port. Durban’s port handled 3253 ships with a gross tonnage of 122 million gross tons in 2019. Eighty-one million tons of cargo were handled by the port.

Each year, it transports up to 31.4 million tons of freight. In 2012, it handled a remarkable 2.5 million TEUs, according to records

It features two floating ducks, one of which is under the custody of the National Park Service. Over 880 ships pass through this port each month, and the number is growing every year.

Port Richards Bay, which is roughly 40 years old, is one of the world’s largest ports. It is the world’s largest coal export terminal near the Durban port. The location was once a tiny fishing town before being transformed into an industrial city. The addition of this beautiful port then enhanced it.

On the eastern seaboard of South Africa, the Port of Richards Bay, the world’s largest coal export terminal, lies about 160 kilometers north of Durban and 465 kilometers south of Maputo. Accounting for more than 60% of all seaborne freight in South Africa. Roughly 1700 vessels call at one of five dedicated cargo-handling facilities each year.

The Port of Richards Bay features a 300-meter-wide entrance channel with a 17.5-meter draft.

It has a  new bulk liquid handling dock, and a ship maintenance facility is already under construction. The sister port at Durban, 160 kilometers south, handles container traffic for the hinterland, although a 50,000 TEU container handling facility project is in the basic design stage

It is the largest of Tanzania’s cities and the country’s capital. Most of the country’s agricultural and mineral exports are shipped through the Port of Dar es Salaam.

Dar Es Salaam is one beautiful port, and it is a Tanzanian competitor to Port Mombasa.

The two ports compete healthily, as is customary in Africa. This port is vital to the worldwide market and serves as a historical monument in Africa.

The port takes advantage of its location at the crossroads of two railway lines reaching the. In addition, 2 kilometers from the harbor is an inland container depot.

Kenya is noted for its remarkable export and import operations through the Mombasa port, located in one of Africa’s most prominent towns.

Uganda, Burundi, Rwanda, and the Democratic Republic of Congo use Mombasa as their common port. This port, built-in 1980, now sees a lot of heavy traffic.

Because it was built before Portuguese explorers arrived in the region, Port Mombasa is known as “the city of merchants.”

A railway service connects the port to local enterprises in Kenya, Uganda, and Tanzania. It also connects those dealers to 80 ports worldwide. It has a container capacity of 1.4 million.

Cold storage, warehousing, and container terminals are available at the port. Mombasa handles major international shipping lines and has around 8.1 million tonnes of annual freight flow, with imports accounting for 72 percent.

This is one of Africa’s oldest ports. It has existed since the 1970s and serves as a point of entry to other continents and countries. Port Saldanha Bay is one of Africa’s most efficient ports, and it has made a name for itself by keeping up with the times.

It is partially protected by a 3.1km long artificial breakwater located at Longitude 17o 58′ E and Latitude 33o 02′ S.

Dutch explorer Van Spilbergen explored Saldanha Bay in 1601. It was probably only the scarcity of freshwater that prevented this otherwise outstanding natural harbor from overtaking Cape Town as the primary port along Africa’s south coast.

When it became necessary to facilitate iron ore export from Mines in the Northern Cape, the port was transformed into a modern harbor. This necessitated the construction of an 800-kilometer railway to the Sishen mines in the north.

This is one of Africa’s most advanced ports. The port established a name for itself in the trading sector only a decade after it was built.

Egypt benefits greatly from the Suez Canal port since it connects it to Africa. International collaborators and tourists flock to the city.

At Port Said East’s northern entrance to the Suez Canal, a cutting-edge transshipment facility has evolved to serve the Mediterranean. The facility is strategically placed at the Suez Canal’s entry, allowing vessels catering to European trade from the Middle East, Asia, and East Africa to pass through with little detour. With operations beginning in 2004, the container port is one of Africa’s newest, and its position in the Top Ten African Ports is justified due to its rapid growth.

SCCT was the first Egyptian port to have 12 super post-Panamax cranes, and the port handled 700,000 TEUs in its first full year of operation. During the first 18 months of operation, the one million TEU mark was reached.

The terminal’s quay wall is 1,200 meters long, and it can accommodate 47,500 containers, with 976 reefer slots. A plan to expand the terminal’s size by 2009 is already underway.

In January 2007, the port set a new national record for productivity, with 47.6 transfers per hour. In just one day, a total of 1482 containers were moved.

The Port of Lagos is one of West Africa’s most well-known ports. It is separated into three sections: the Lagos Port, Tin Can Port, and Apapa Port, all located in Nigeria. Each component is placed in the Gulf of Guinea with care.

It is linked to its neighbors, including Benin, Niger, and Cameroon. Another notable feature is the Marina transportation academy, which provides many jobs for the residents.

The terminal handles consumer items, foodstuffs, automobiles, machinery, and industrial raw materials for Africa’s most populous country. Since the early 1970s, the port has handled increasing crude oil exports despite diminishing export commerce in timber and agricultural items like cacao and groundnuts.

The increased importance of petroleum products in the Nigerian Economy has helped compensate for the drop in raw materials. The hydrocarbon sector accounted for 20percentage points of the Economy and 95% of foreign exchange earnings.

The increased importance of petroleum products in the Nigerian Economy has helped compensate for the drop in raw materials. The hydrocarbon sector accounted for 20percentage points of the Economy and 95% of foreign exchange earnings.

The port is the western terminus for Nigeria’s road and rail networks, and Ijebu Terminal handles both domestic & global travelers.

Walvis Bay port is a major international trading port halfway down Namibia’s coast. It has easy access to key maritime lanes. Port Walvis Bay is Namibia’s busiest commercial port, with over 3,000 ships passing through each year. 5 million tons of cargo pass through the port.

It is a world-class infrastructure and dependable machinery. Cargoes are transported safely and reliably. The Walvis Bay Port handles containers, transshipments, and bulk commodities.

The import and export business in Namibia, West Africa, is mostly handled by this port. When foreign exporters consider the African market, this port is their first choice because it is one of the most business-friendly possibilities. The port is a lovely destination and an excellent starting point for new importers and exporters.

The port now handles more than two million tonnes of cargo per year and attracts more regular callers. Unicorn Lines, which runs a weekly coaster service between the United States and South Africa, and Maersk, Safmarine, and MACS Line, which offer connections or direct sailing to Europe, are among them.

Walvis Bay receives an average of 1000 ships per year. The current capacity is estimated to be 5 million tonnes. There’s also a dolphin-style tanker berth for tankers up to 192 meters long and a tanker berth for smaller vessels.

On the northern side of the Mozambique Channel, the Port of Beira is located. Through the Port of Beira, Central African goods are exported. The Port of Beira serves as the principal port for inland nations thanks to railways connecting Zimbabwe, Congo, Zambia, and Malawi to the port.

The city of Beira is Mozambique’s third-largest. The container terminal features four berths, each measuring 645 meters in length. The terminal’s annual capacity is estimated to be 400,000 TEUs.

This port, connected to the Pungue River, is one of Africa’s most important ports. One of the port’s importance is its train and road connections to Zimbabwe, Malawi, and Zambia.

Port Beira enjoys direct access to Europe, Asia, and the Middle East through the sea. Its multiple berths are well-known for transport and fishing, and this port is among Africa’s top ten ports.

Djibouti Port is a port in Djibouti City, Djibouti Republic. Europe, the Far East, the Horn of Africa, and the Persian Gulf are all connected through this port.

Apart from its unusual name, one of the advantages of Port Djibouti is its train connection to Ethiopia. It also benefits from being connected to over 40 foreign corporations as the principal import and export transit point.

This port is regarded as the most efficient in the trading industry and is active all year. If traders and importers want to use Port Djibouti, they must often reserve cargo in advance.

In conclusion, the ports of Africa are best because most of them are a source of revenue for the nation and tourist attractions in their country.

The Port of Durban, often known as Durban Harbour, is Sub-Saharan Africa’s largest and busiest maritime terminal. Each year, it transports up to 31.4 million tons of freight.

Kilindini Harbour is the heart of the Port of Mombasa, Kenya’s only international port and the continent’s largest. Kenya Ports Authority manages it.

Various mineral exports, steel coils, and pig iron are among the cargo handled at the multi-purpose terminal. Anthracite, coking coal, and steel pellets are among the imports. Port control is available around the clock. Saldanha Bay has no bunkering facilities.

Main Reasons Your Cargo Is Delayed