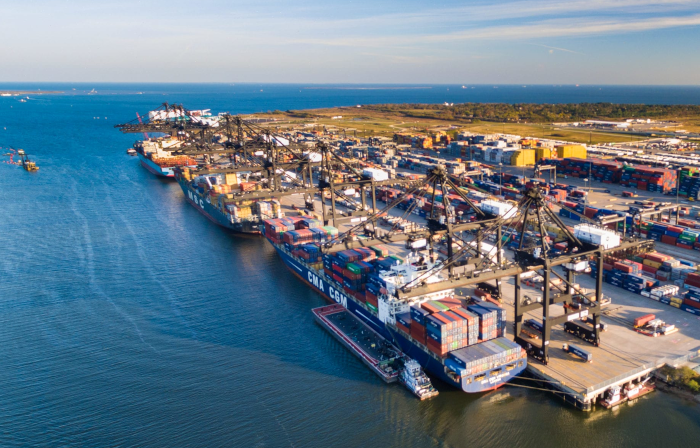 10 Biggest Ports In The US and Canada

The following are the 10 Largest Ports in North America:

Ports are growth accelerators and handle essential items such as gasoline and food. They support hundreds of thousands of jobs and are important revenue generators for both the federal and state governments in North America.

The economic contribution of a port is determined by its size and the volume of goods it handles. As a result, our ranking of the ten largest portshttps://ameritransfreight.com/the-largest-and-busiest-ports-in-the-u-s/ in North America should be viewed as a list of some of America’s and Canada’s most important economic centers. 10 Largest Harbors in North America, United states largest Ports in the World, What are the 5 largest ports in the US ? U.S. container ports. These questions are answered below

The Los Angeles Port, also referred to as America’s Port, is North America’s largest Port. It manages 20% of all arriving freight for the United States and is spread out over 7500 acres. In 2019, it handled 9.3 million twenty-foot equivalent units (TEU), up 5.5 percent from the 8.8 million TEUs it handled the previous year. Los Angeles Port is among the 10 Largest Harbors in USA and Canada.

The Port of Los Angeles is located in the San Pedro Bay of western US California.  Given its advantageous location, it makes sense that it is in charge of most transpacific trade. The port, also known as America’s Port, occupies 7,500 acres of land with a 43-mile waterfront that processed approximately 4.4 million TEUs in 2015. This represents 13.5% of the market share in North America. It has maintained its position as the top port in the US since 2000. Regarding the volume of containers handled, it is presently the 19th busiest port in the world. Every day, freight is reportedly transported to and from the Los Angeles port worth an estimated $1.2 billion.

It has been the most important Port in the United States since 2000. In terms of container volume, it is now ranked as the world’s 19th busiest Port. Every day, over $1.2 billion in cargo is anticipated to be moved to and from the Los Angeles port.

The entire complex spans 70 kilometers of coastline and encompasses 30 square kilometers. In 1907, it was founded.

Two hundred seventy quays and 27 terminals are available at the Port.

In terms of container traffic, it is the United States largest Ports with around 9.7 million TEU in 2018.

Long Beach port is the second major Harbor on our list and is only 30 kilometers away from the Los Angeles Port. It was established in 1911 and is now one of the essential commerce routes between Asia and North America. Long Beach Port was one of the first to implement environmentally friendly rules, such as the Green Port Policy, to lessen its environmental impact. The Port is more than 12 km2 in size. Eighty quays and 71 cranes handle container handling. It first opened its doors in 1911. The Port’s key partners are predominantly States in Eastern Europe. Over 8 million TEUs were transshipped at the Port in 2018.

The Port is well-known for its eco-friendly policies and environmental stewardship. It is the most advanced Port in this regard.

Container transport to and from Long Beach is quite popular because it is one of the significant commerce gates to Asia.

The Port’s environmental measures evolved in lockstep with the Port’s rising vessel traffic and cargo. By modernizing petroleum coke production, one of the Port’s main exports, the Port of Long Beach met an air pollution requirement in 2004. The Port was able to minimize the amount of dust generated by petroleum coke by 5%, compared to 21% in 1997, by adopting enclosed conveyors and covered storage facilities.

Long Beach is one of the main entry points for trade with Asia. Thus, shipping containers to and from there is very common.In 2015, it handled more than 4.9 million TEUs or 12.1% of the market in North America. Over a fifth of all container trade in North America is handled by them and the Port of Los Angeles together. The annual commerce movement at the Long Beach Port is about $180 billion.

Overall, this port processed massive amounts of cargo in 2019 in terms of tonnage and TEUs.

The port is a significant entry point for trade between the US and Asia. The port is a well-known environmental leader with cutting-edge initiatives, including the distinguished Green Port Policy.

With connections to 217 seaports worldwide, POLB has 22 maritime terminals, six of which handle container ships.

The Port of New York and New Jersey is the East Coast’s biggest Port in USA. It’s also the country’s third-largest transshipment port.

The Port is roughly 4 km2 in size. The complex authorities operate seven freight ports and several privately owned terminals. When it comes to reloading vehicles, The port complex is the largest in the United States and one of the most vital for reloading items such as bananas and cocoa. Imports of beverages, automobiles, and plastic are expected at the New York & New Jersey Port. Wood pulp, plastic, and machinery were the top export goods.

In 2015, the Ports of New York and New Jersey handled over 4.5 million TEUs, accounting for roughly 11% of North American container throughput. The commodities handled are petroleum, scrap metal, bulk, and breakbulk freight. In 2018, the Port handled 7.1 million TEU in transshipments.

Year after year, the amount of traffic at the Port grows. Over 14 million cargo containers were handled in 2019, according to the official trade report on the Port of New York and New Jersey website, conveying cargo worth more than $80 trillion.

Georgia’s two major ports are Savannah and Brunswick. Savannah is home to the largest single-terminal container facility in North America and the country’s highest concentration of import distribution hubs. The main Port for new auto imports is Brunswick Port, which has roughly 500 acres of property leased or operated by the auto industry.

The USEC has the highest concentration of import distribution centers. In October 2017, container traffic increased by 32%, with the Garden City Terminal carrying 410,000 TEUs, an increase of approximately 100,000 TEUs.

Take the fourth spot on our ranking of the largest ports in North America when combined. The Port of Savannah has the country’s largest single-terminal container facility, while Brunswick is a hub for vehicle imports, with more than twelve auto manufacturers using it. Savannah alone has a container volume of 4.35 million TEU. Garden City (1200 acres) and Ocean terminals are Deepwater terminals (200 acres). Automobiles, heavy machinery, and agricultural products are examples of primary goods.

The combination of the two Washington ports in 2014 gave birth to the Port of Seattle-Tacoma. It surpassed the third-largest cargo handling facility in the United States in 2015. The Port generated $9.7 billion in revenue in 2017, making it an essential part of the area’s economy. The Port invested $500 million in Terminal 5 in 2019 to upgrade it. It has 3.7 million TEUs of container volume,4.2 million full containers, and Oilseeds and cereals and machinery and computers are the primary exports.

Metro Vancouver Port- Among10 Biggest ports in US and Canada

Vancouver is Canada’s largest Port, amalgamated with the North Fraser Port Authority and the Fraser River Port Authority in 2008 to establish Port Metro Vancouver. The Port, which spans 3700 acres, is as large as Canada’s following five major ports and is set to develop at a 3.5 percent yearly rate.

The Ports of Virginia

The Port of Virginia, one of the largest and busiest ports on the East Coast, has grown at 2.6 percent per year over the past five years. With companies like Amazon and Navien establishing facilities in the state, the Port can only get busier. The critical terminals in this city are Norfolk, Portsmouth, Newport, Virginia International, and Virginia Inland. The Port of Savannah is likely to benefit significantly from the combined economies of scale now that regulators have approved the Georgia-Virginia agreement between the ports of Savannah and Virginia.

It has the following characteristics:

In 2016, the Harbor of Houston, Florida, was the Gulf Coast’s largest Terminal, processing 68 percent of all container traffic. With imports up 23% year over year through May and exports up 7% year over year through April, the Port of Houston should increase the rankings next year. Houston just received new super post-Panamax ship-to-shore cranes, further boosting the Port’s competitiveness. The Houston Ship Channel will be deepened to 45 feet, thanks to a $1.6 billion investment by the Port of Houston Authority.

On Galveston Bay, the Port of Houston was established in 1909. Crude oil and derivatives, as well as organic compounds, are the principal exports from the Port. Imports include petroleum, associated products, iron, and steel. Mexico, Venezuela, Saudi Arabia, Iraq, and Algeria are the leading suppliers of goods. In 2018, the Port transshipped approximately 2.5 million TEU of cargo.

The South Carolina ports are comprised of Georgetown and Charleston. The Harbor’s importance to South Carolina’s economy can be gauged because it directly or indirectly supplies 10% of all jobs in the state, with incomes 32% higher than the state average.

The Port can handle bulk goods such as crude oil, coal, and steel. The Port was devastated during the civil war. It has been receiving funding since 1942, and as a result, it has been progressively developing.

The first container ship ports were constructed in this city. It was the first important Port on the Pacific Coast. Despite being overshadowed by its bigger brethren, the Port of Oakland is regarded among the top three gateways on the West Coast. The Port handles nearly all of Northern California’s containerized commodities.

The Port of Oakland’s loaded container volume is high, handling almost 99 percent of containerized products traveling in and out of Northern California. In comparison to 2015, volume increased by 4% in 2016. Oakland is set to start building on the world’s largest logistic hub within a U.S. seaport in the first quarter of 2018.

There are three container terminals and two intermodal train stations on the city’s coastline. It will serve more than 14.5 million people and be able to reach 34 million people in less than seven hours by car.

1 What are the top five most significant ports in North America?

Long Beach is one of the largest in North America, roughly 30 kilometers south of the Los Angeles Terminal, is North America’s second-largest.  The Ports of New York and New Jersey, Norfolk , and Houston are the largest  on the East Coast.

2.Is your company involved in international trade between North America and other continents?

If that’s the case, your cargo will almost certainly pass via these top-10 container ports. Apart from their economic importance to Canada and the United States, it’s always beneficial to have a basic understanding of the facilities that will handle your maritime freight.

The New York and New Jersey is the biggest in U.S. East Coast and the country’s third-largest and busiest Port, handling 7,585,819 TEU in 2020 and having a capacity of about 9 million TEU.

Ports are important travel hubs that allow goods to be delivered to local and global markets. Our highway system, railroads, air transportation, and domestic maritime highways may all be used to link commodities to consumers (water transportation routes). Seaports, as well as smaller intercoastal and interior ports, help to facilitate the movement of goods between ports and neighboring villages.

Seaport activities generate millions of dollars in federal, provincial, and local taxes. The U.S. Coast Guard estimates that 360 commercial ports serve the country. Many of them are capable of managing ocean-going cargo and barges, ferries, and recreation ships.

Main Reasons Your Cargo Is Delayed