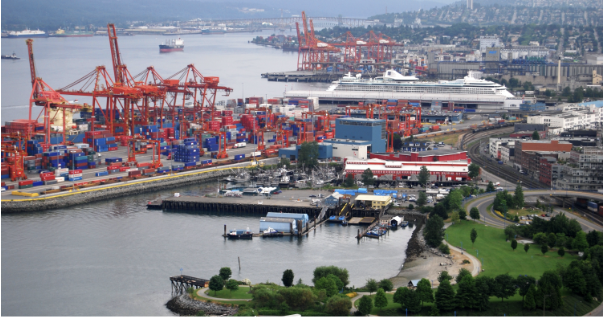 The largest and busiest ports in the U.S .America’s ports are responsible for the secure processing of billions of dollars in cargo trade as well as the creation of millions of jobs. These ports, which are critical to the American and global economy, are designed, operated, and improved by civil engineers. These systems were created to be energy efficient and safe, with specific environmental programs that maximize energy efficiency and reduce pollution while keeping production and delivery schedules on track.

Thanks to shipping, intercontinental trade is not only possible but also efficient and profitable. According to the Office of the United States Trade Representative, the United States dominates the global trade economy, importing and exporting more than $5.6 trillion in products and services in 2019. Furthermore, the government has trade agreements in place with more than 200 territories, countries, and regional organizations throughout the world. It is reasonable to infer that the largest and busiest ports in the U.S has long been a major player in the maritime freight industry.

Some of the largest and busiest ports in the country are Los Angeles, Long Beach, and New York, as well as New Jersey

The largest and busiest ports in the U.S is the Los Angeles Port, also known as America’s Port, is the busiest port in the United States. The Los Angeles Board of Harbor Commissioners, which was created in 1907, governs the port. This vast port, located in the San Pedro district 25 miles south of downtown Los Angeles, spans 7,500 acres of land and sea along 43 miles of California coastline.

Total land area: 7500 acres. There are a total of 25 cargo terminals. Every year, 1867 vessels transport 178 million metric revenue tons of freight. The freight value is $276 billion dollars every year. The major trading partners are China and Hong Kong, Japan, and South Korea. Directly and indirectly, 1.6 million people are employed in the United States.

It has a significant monetary impact. According to the official website of the Port of Los Angeles, the port will handle $259 billion in trade in 2020. In addition, it supported 133,000 jobs in Los Angeles and 1.58 million across the country.

Port of Long of Beach. 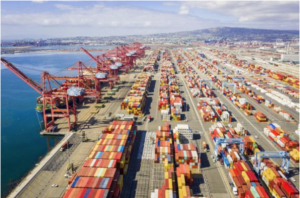 The Port of Long Beach, the second largest port and busiest port which  , is only 30 kilometers from the Los Angeles Port. It was founded in 1911 and is now one of the most important trading hubs between Asia and North America. The Long Beach Port was one of the first to implement environmentally friendly regulations to lessen its environmental impact, such as the Green Port Policy

The Los Angeles Port is across the street from the Long Beach Port. Container transport to and from Long Beach is quite popular because it is one of the major commerce gates to Asia.

The port’s environmental measures evolved in lockstep with the port’s rising vessel traffic and cargo. By modernizing petroleum coke production, one of the port’s main exports, the Port of Long Beach met an air pollution requirement in 2004. The port was able to minimize the amount of dust generated by petroleum coke by 5%, compared to 21% in 1997, by adopting enclosed conveyors and covered storage facilities.

The seaport banned older diesel trucks from serving the port in 2007. The Ports of Long Beach and Los Angeles inaugurated the Clean Trucks Program on October 1, 2011. By 2012, the program aimed to cut air pollution from its truck fleet by 80%. Access to port terminals is denied to trucks constructed before 1987 that do not meet the US Environmental Protection Agency’s 2007 clean vehicle rules. Beginning October 1, all trucking companies that do business with the port must obtain a concession from the port outlining the rules they must follow in order to comply with the clean truck initiative. By September 23, 2011, over 6,000 transportation businesses had applied for over 500 concessions.

According to the official website of the Port of Long Beach, the port is now the second busiest in the United States, with almost $200 billion in trade passing through each year. Toys, apparel, consumer electronics, autos, fuel, cement, lumber, steel, and other commodities are all transported through the port. In Long Beach, one out of every five occupations are tied to the port, which accounts for approximately 50,000 employees.

The Green Port Gateway project sought to boost the port’s rail system’s efficiency and capacity. By reducing the number of vehicles on the road, the purpose was to reduce derailments, improve rail traffic flow, and reduce pollution. In the year 2015, the project was finished.

This second-busiest U.S. port had its second-busiest year in history in 2021, serving approximately 8.1 million container units while maintaining its reputation as a strong champion for industry, the environment, and the community.

The Port of New York and New Jersey

New York and New Jersey’s Port is the country’s third largest and busiest ports which are  economic center. In 1921, the two states agreed to form the Port Authority of New York to develop and modernize the port as a result of increased marine traffic in the Hudson and East rivers in the early 1900s.

The Ports of New York and New Jersey handled approximately 4.5 million TEUs in 2015, accounting for roughly 11% of all container throughput in North America. Petroleum, scrap metal, bulk, and breakbulk freight are among the commodities handled.

After the Great Depression and two World Wars, the Port Authority’s principal terminal, Port Newark, was in desperate need of repair. With a total of 21 berths and a 35-foot-deep waterway, large ships could be accommodated in 1951. Year after year, the port’s traffic volume increases. According to the Port of New York and New Jersey’s official trade report, nearly 4.2 million cargo containers were handled in 2019, transporting cargo worth more than $200 billion.

Savannah and Brunswick are Georgia’s two major ports. Savannah is home to North America’s largest single-terminal container facility as well as the country’s most concentrated import distribution centers. Brunswick Port, which contains around 500 acres of property leased or maintained by the auto industry, is the principal port for new auto imports.

In 2015, Washington’s two largest ports united to form a single corporation that manages the state’s cargo facilities. The Northwest Seaport Alliance manages both the Port of Seattle and the Port of Tacoma. In 2015, the two ports handled 2.1 million TEUs, accounting for 5.3% of the North American market. Due to an increase in container traffic, the ports of Seattle and Tacoma achieved their largest first-quarter international container volumes since 2005 in April 2017.

The Port of Virginia is also one of the busiest ports on the East Coast, with 11.6 percent of all traffic passing through. Ships can reach the open sea in around 2.5 hours because to its advantageous location. Because of its well-connected railway, a third of its cargo arrives and departs by rail, the highest percentage of any US East Coast port.

The first such port agreement between Georgia and Virginia port officials was recently approved by US regulators. This new joint venture has been operational for about a month. The ports’ attraction is expected to grow as they try to share information and benefit from synergies.

When it comes to international waterborne tonnage, the Port of Houston is the busiest in the United States. Along with the 50-mile-long port, there are over 200 public and private ports. Houston Port, the largest port on the Gulf Coast, handles 52% of the region’s project cargo.

It extends 25 miles across the United States’ fourth-largest state and is only a few hours away from the Gulf of Mexico. Many importers and exporters prefer to ship containers to Houston, which should come as no surprise. In 2016, the port handled 68 percent of all container traffic on the United States’ Gulf Coast. To meet the Panama Canal extension and an increase of container ships, it has purchased more super post-Panamax ship-to-shore cranes.

The seaports of Charleston and Georgetown are located in South Carolina. Containers, automobiles, and cruise ships can all be handled at the five public ports of the Port of Charleston. Shippers prefer to transport containers to Charleston for the following reasons: The Port of Georgetown, 60 miles north, gives excellent access to inland coverage and vital markets.

Bulk and break bulk storage is handled at the Georgetown facility. The South Carolina Department of Administration was given the responsibility of selling a previously operated break bulk facility in Port Royal in late 2016.

The Port of is one of three major containerized freight ports on the US West Coast. It also handles and accounts for nearly all containerized products that enter and exit North California. Three container terminals and two intermodal train stations are located along the city’s coastline. It will serve over 14.5 million people and can reach 34 million people in under seven hours by automobile.

The largest and busiest ports in the U.s is MIAMI  which is a seaport on Biscayne Bay in the state of Florida, United States. It is known as the “Cruise Capital of the World” and is one of the world’s most important business and tourism centers. It mostly transports containerized freight, with some breakbulk, industrial machinery, and automobiles are thrown in for good measure.

However, the fastest way to ship a container to Miami is via Gdynia – Miami, which takes an average of two days. Goteborg to Miami is the quickest route.

Why are ports essential?

As commerce grows, ports are attempting to boost internal capacity by improving efficiency and investing in infrastructure to support larger ships. To circumvent bottlenecks caused by other modes of transportation, ports may collaborate with municipalities, Metropolitan Planning Organizations, state and federal Departments of Transportation, and other organizations to expand transportation capacity outside of the port.

What is the largest container port in the US?

What is the 3rd largest ocean?

What are the 3 largest container ports in us?

The largest and busiest ports in the U.s include;

In the United States of America in 2021, who will “The largest and busiest ports in the U.S

Ameritrans freight international shipping company offers both door-to-door and door to port ocean freight services. This includes cargo pickup and delivery to and from the postal codes you supply, ensuring a more seamless end-to-end shipping experience.

Cost of Shipping a Container